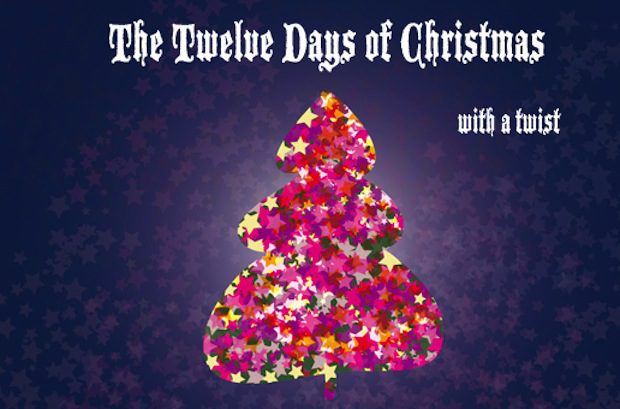 On the first day of Christmas my true love sent to me: A Partridge in a Pear Tree…

I’m sure you’ve heard the whole song many many times over, but do you know what it means?  When do the twelve days start? Often the old songs that we sing or hear were created with much deeper meanings than we are aware of.  Songs of this age are difficult to verify with certainty but we have put together some of the believed origins of it for you here.

When does the twelve days of Christmas start?

In most cases the twelve days of Christmas is celebrated starting on Christmas day or the day after.

Where is it Believed to Have Been Originally Created?

“The Twelve Days of Christmas” was believed to be sung as early as 1770 but was not imported to the United States until 1910.  It is believed to have been used in England as one of the “catechism songs” to help young Catholics learn the tenets of their faith – a memory aid, because this was a time when to be caught with anything in *writing* indicating adherence to the Catholic faith could not only get you imprisoned, it could get you hanged, or shortened by a head – or hanged, drawn and quartered, a rather peculiar and ghastly punishment I’m not aware was ever practiced anywhere else.

What Do the Different Gifts Mean?

Although there are conflicting stories about what the meaning of the song actually is, it is often stated that songs gifts are believed to be hidden meanings to the teachings of the faith.  Some claim that it is merely a children story, but in review of history we frequently find that men and women of faith found creative ways to pass along the truth of Christmas when written or other means were unsafe or unavailable.

The “true love” mentioned in the song doesn’t refer to an earthly suitor, it refers to God Himself. The “me” who receives the presents refers to every person of faith. The partridge in a pear tree is Jesus Christ, the Son of God. In the song, Christ is symbolically presented as a mother partridge which feigns injury to decoy predators from her helpless nestlings, much in memory of the expression of Christ’s sadness over the fate of Jerusalem: “Jerusalem! Jerusalem! How often would I have sheltered thee under my wings, as a hen does her chicks, but thou wouldst not have it so…”

The  Symbols Mean the Following:

4 Calling Birds = the Four Gospels and/or the Four Evangelists

5 Golden Rings = The first Five Books of the Old Testament, the “Pentateuch”, which gives the history of man’s fall from grace.

7 Swans A-swimming = the seven gifts of the Holy Spirit, the seven sacraments

9 Ladies Dancing = the nine Fruits of the Holy Spirit

So there you have it, some of the history and opinions that surround the song you’ve heard before.  So here is the twist!

Since the Geauga News is your new community, we’re changing up the twelve days a little bit and we are starting the count down to Christmas right now.  Each day, you’ll need to find the picture from the days verse somewhere on our digital property.  We’ll have it hidden on Facebook, Twitter, or somewhere here on our site.  Once you find it, comment here on this post and tell us where it is!  As we move forward closer to Christmas we’ll be giving away prizes and other gifts to the first people that find it.  So go find today’s gift!